The story takes place in the not-too-distant future. After eighty years of peace and prosperity, the world seemed like a perfect place: there were no wars, crime worldwide was at an all-time low. But new conflicts sprung up suddenly with conflict between the countries getting very out of hand. Red buttons were pushed down and nuclear missiles went up.

Though some humans had enough foresight to go underground before the nukes totaled the planet, most of the populated cities like New York City, Cairo, Prague, Los Angeles, Tokyo, and Hong Kong were all nuked. But the radiation went on killing more of the surface-lying humans.

War between the Survivors and the Evolved

The few humans on the surface that survived had some crazy beliefs. They believed that the nukes were sent down by gods called the scourge. They thought that the scourge punished humanity for things like pollution, overpopulation, high technology, space travel, politics, and the lack of god worshipping. So they sat around on the surface mutating and taming the mutated beasts so that when the “Symmetrics” rise from the ground they will get killed.

So after 60 years the Survivors started crawling towards the surface. The first person who stuck their head out of the ground had it blown right off! Then, after much fighting the disease which mutated the “Evolved” got to the Survivors, the Survivors went back under because of Agoraphobia. And the Evolved fled into the desert because of lack of population.

The Evolved sat around on the surface getting even more mutated while the Survivors kept renumbering and redesigning their technology. Although it wasn’t the two nuke survivors being the only ones in the war now… now there was a third species: they were the Series 9.

Before the planet got utterly totaled, there were 9 series of robots which were programmed to do tasks any normal person would not want to do. Series 1-4 worked in the cities so they died immediately. Series 5-8 worked in mines. And the series 9 worked on farms. But once the nukes hit the series 9 being the most populous series they killed series 5-8.

Now that their crops were destroyed because of the nukes, the series 9 developed feelings. After 60 years of developing a better AI. They wanted revenge and they wanted it bad. After they learned of the survivors and the evolved they went to kill them all. Although after learning that the survivors had things like giant chain gun wielding tanks. Or the evolved had missile packs surgically implanted into giant crabs. And the Series 9 had picks and scythes.

So they spent a 40 years going over the weapon files of the world before it was nuked. They redesigned farming equipment so that they could be armed to kill. Now with the evolved being even more mutated. The survivors back with better technology. And the series 9 ready for battle. Well it looks like there will be an entire Armageddon just so that the victor will win. 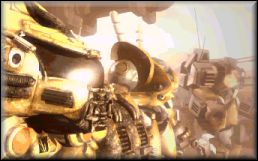